Terror for Minorities In The Plateau Region of Nigeria Part 2 By: Arandong Ngocheck and Zemira Eli Natan

"On the 17 and 18 of APRIL, 2014. An attack
was carried out by the fulani /hausa islamic-jihadist terrorist at 04 : 37 pmon the 17 of APRIL, 2014 and also on 18 of APRIL, 2014 at about 06 : 37 am on this two neighbouring village's of SAKKASS and GURAHBWAKK of FAN - DISTRICT of BARAKIN - LADI Local Government Area of the MIDDLE - BELT region of PLATEAU STATE NIGERIA. During the attacks on this villages, TEN - PEOPLE lost their lives on those faithful days. Our guide to SAKKASS and GURAHBWAKK is MR. JERRY {JEREMIAH} GYANG who lost his elder brother MR. JOSHUA GYANG and his son MR. EZEKIEL JOSHUA GYANG who were among those murdered by the evil fulani /hausa islamic-jihadist terrorist. The late MR. JOSHUA GYANG, left behind him five children and their names are as follows : - MR ISA'AC JOSHUA GYANG, MR. DAGWOM JOSHUA GYANG, MISS YOP JOSHUA GYANG, MISS NA'OMI JOSHUA GYANG, MISS ROSE JOSHUA GYANG and their mother MRS. ESTHER JOSHUA GYANG. Before the demised of late MR. JOSHUA GYANG, all his children we schooling. But after his death, only one is now schooling. And the one schooling is MR. DAGWOM JOSHUA GYANG. And also they were scores of injuries of which our guide, MR. JERRY {JEREMIAH} GYANG was among the victims of the attacks by the evil fulani /hausa islamic-jihadist terrorist. As you can have a look at the picture, you can see on his head a of bullets and his right EYE has been damaged during the incident. MR. JERRY {JEREMIAH} GYANG is now having permanent marks because of the activities of the fulani /hausa islamic-jihadist terrorist who are bend on trying to islamised and have a shariah law at all cost on the good "CHRISTIAN'S" of the MIDDLE - BELT region of NIGERIA especially PLATEAU STATE. The "CHRISTIAN'S" on the MIDDLE - BELT region of NIGERIA, if urgent steps are not put in place by the WORLD - "CHRISTIAN" leaders around the globe, I mean one day the WORLD will wake up and found out that there are no more "CHRISTIAN'S" to found within the MIDDLE - BELT region of NIGERIA if our "CHRISTIAN" leaders continue to behaved as it is currently happening. Because if measures are not put in place right now, I hardly see the "CHRISTIAN'S" of the MIDDLE - BELT region of NIGERIA surviving in this region for the next decade or so. Because it will come to a time that you either take the devil's sword of evil islam or you will be crushed to death. As I write to you "ZEMIRA ELI NATAN". I am not exempted from the evil hands of this idiots and cowards of this fulani /hausa islamic-jihadist terrorist. "ZEMIRA ELI NATAN", the activities of this fulani /hausa islamic-jihadist terrorist it is on a daily basis over the good "CHRISTIAN'S" of the MIDDLE - BELT region of NIGERIA. On the same day of of 1 NOVEMBER, 2015. I and my WONDERFUL - GREAT friend and indeed a brother to me MR. "SAMM TEE MANGUT" left SAKKASS and GURAHBWAKK village's for onwards journey that took us to KADUNU village of LANGAI district of PYEM - CHIEFDOM in MANGU Local Government Area of PLATEAU STATE NIGERIA. Of which twenty one person's were confirmed dead. Our amiable guide to KADUNU village is one MR. JACOB M LANGA who was an indigene of KADUNU before the crisis. KADUNU village is estimated to have a population of about four thousand five hundred and fifty seven inhabitants. And out of the above population, "CHRISTIAN'S" have a good sizeable number of over one thousand population in KADUNU village. What is so astonishing and so scary is that, as at time of filling in this report on the 1 NOVEMBER, 2015, there is no "CHRISTIAN" that is currently living in KADUNU village. All the "CHRISTIAN" houses in KADUNU village are burned down as you can see for yourself some images of the burned houses in KADUNU village. The attack on the KADUNU village took place on the 15 SEPTEMBER, 2015 in the evening of that faithful day. The "CHRISTIAN'S" only visit their home land KADUNU village in the morning hours of 08 : 30 am and will have to go back immediately before 05 : 30 pm local time in NIGERIA. In other to avoid any casualty that may occur on their way back to their safety areas. Now, the "CHRISTIAN'S" - WORLD leaders are so silent about it. If something is not urgently done now to curtail the evil act by this funded islamic-jihadist terrorist by the islamic occultism society, one day it will definitely rear it's head in the USA, EUROPE, ASIA and already the MIDDLE - EAST region is more complex for the "CHRISTIAN'S" to live. "

"ZEMIRA", this is MR. YUSUF DUNG of SHO village in BARAKIN /LADI Local Government Area of PLATEAU STATE NIGERIA who was shot on the 08 march, 2015 at early hours of 04 : 45 am. And also, on that same day the fulani /hausa islamic-jihadist terrorist came back in evening of 08 March, 2015 @ 08 : 55 pm and murdered his late brother MR. SUNDAY DUNG DACHOLLOM."

MR. YUSUF DUNG, as @ the time of filling in this report, he was just coming back the hospital where he visits the DR for medical check ups. MR. YUSUF DUNG his case is just like some many of them have stress themselves to survive and he has a family to take care of. And the situation is so pathetic.

"ZEMIRA", the current situation I really wonder how I can explain it to you so much that you can understand. Because I really really nearly shed tears because he was really an enterprising person before this incident took place. But now, he has to support himself to walk because of the bullets and he also has a wife and five children who really depend on him for their school fees and he has to pay his rent, electricity, and water bills. Things are really not going on well with MR. YUSUF DUNG right now

"Now, MR. YUSUF DUNG is in JOS the capital city of PLATEAU STATE NIGERIA. Because of his condition and the village is always under constant attack, so he can longer stay there with his family until the situation improves in by future."


"ZEMIRA", this was the little interview that I had with the victim of the incident in the person of MR. BALA TOJE KANGONG of SHO village of ROPP district of BARAKIN /LADI Local Government Area of PLATEAU STATE NIGERIA on the 16 of NOVEMBER, 2015" 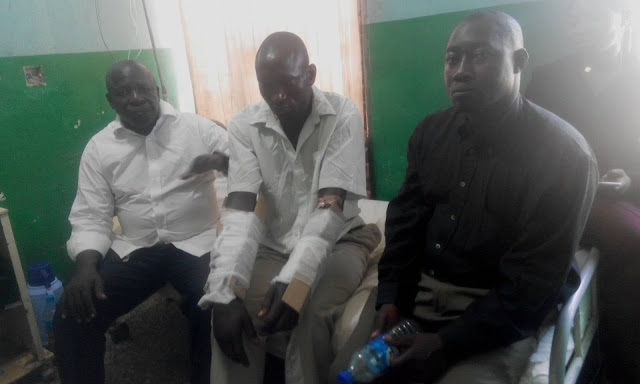 Photo Courtesy of Arandong Ngocheck
Victim in Hospital moments after he was attacked
7:16 AM November 16, 2015

At the time this incident occurred and the patient, Mr. Bala Toje was rushed to the Emergency hospital in Joss which is approximately 120 Kilometers from the village where the victim resides.  Mr. Arandong Ngocheck confirmed with me the details of this incident.  I was fortunate to be able to speak directly with the victim despite his stress from treatment of his wounds inflicted upon him by Fulani/ Hausa Islamic Jihadi Group with AK47 weapon.  All statements as reported below by Mr. Arandong Ngocheck are true and correct.

"ZEMIRA", the above picture is of MR. BALA TOJE KANGONG of SHO village of ROPP district of BARAKIN /LADI Local Government Area of PLATEAU STATE NIGERIA who escaped narrowly from the hands of the wicked fulani /hausa islamic-jihadist terrorist on the 15 of NOVEMBER, 2015 @ HURTI village of MANGUNA district of BOKKOS Local Government Area of PLATEAU STATE NIGERIA. On that very scene, he lost two of his WONDERFUL - FRIENDS namely :- MR. PIUS LANGBWANG left behind him one wife four children. And MR. JOHN PAM MARKUS who also left behind him a wife and four children too.

Time of the incident was around 07 : 37 am local time in NIGERIA.
MR. BALA TOJE KANGONG'S two hands are all broken by the bullets of the AK 47 by the fulani /hausa islamic-jihadist terrorist.

. "ZEMIRA". This are the gun's shot that he got from the bullets of the AK 47 that the fulani /hausa islamic-jihadist terrorist deed to him in SHO village of ROPP district of BARAKIN /LADI Local Government Area of PLATEAU STATE NIGERIA."
----Arandong Ngocheck---- 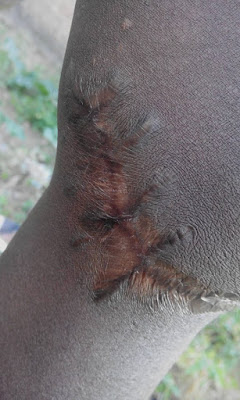 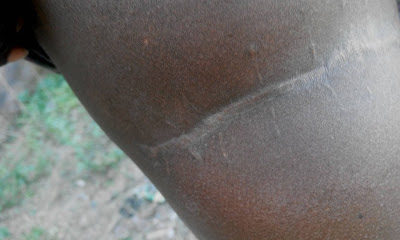 Please make contact with the Reverend of Nigerian Christian Communities in charge:


REV. MUSA VOU JACK, is from SHO village of ROPP district of BARAKIN /LADI Local Government Area of PLATEAU STATE NIGERIA. "ZEMIRA", you can also reach him on this mobile phone number :- +2347083533228